Early Saturday morning, we loaded up all four kids and the dog to make the hour and a half drive to Fort Worth for the Jalapeño Half. The kids were excited – except for the 4:15 am wakeup – because after the race we were going to Grandma and Grandpa’s house. with my brother’s family.

My brother and I ran this race last year for his first half marathon. Since he’s a high school coach and teacher, this is his best time of year for training and racing. On the other hand, I have lower expectations for myself in June.
So what I’m saying is this race was my brother’s idea.

Last Wednesday – 3 days before the race – he sent me a text that he pulled his calf. He was still planning to run though, just slower than he would’ve liked.

We met up at the new venue. Myself and my brother to run the half, and my dad to run the 5k. 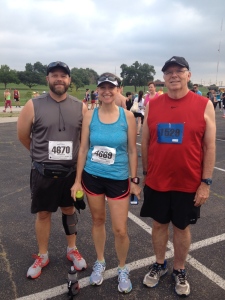 The cloud cover was oh so wonderful! It was humid, but that seems to be a staple right now. The new course ran through some beautiful neighborhood streets near TCU lined with mature trees. Had the sun been out, this canopy would have been even better. We finished the last few miles running through the Trinity Trails. It was a hilly course, but I’ve come to expect that from Fort Worth.

About halfway through I set my focus on finishing under 2 hours – and to finish feeling good. Too many times I have finished a race feeling sick, and then I’m no fun for my support crew. In order for them (him) to keep coming back, I continually remind myself that I enjoy running. To help battle heat and humidity, I dump cups of water over my head at aid stations. The race also had ice cold towels at a station and the finish. It makes a difference.

The only part I didn’t like about the race was seeing the finish line around mile 12. You had to go down about half a mile, cross a bridge, and turn back to the finish. At that point, my legs were seriously done. I just could not go. It wasn’t related to fuel during the race, but probably due to my cutback in carbs over the last week. Weight loss.

I reached both of my goals, and got to see my family after I finished. My official time was 1:58:59 and fourth in my age group – a good several minutes after third place. My dad placed 2nd in his age group in the 5k, and my brother finished despite his pulled muscle. It was a good morning. 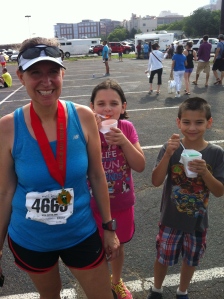 Somehow, after the race and before we got to my parents’ house, I got suckered into this: 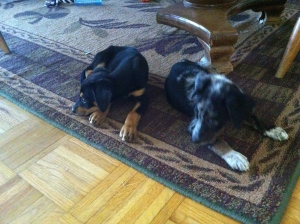 Welcome to the family Callie and Messina. Side note: when you have four kids, the hardest part of new puppies is deciding on names. And getting a good night’s sleep. That’ll throw a wrench in training

The best part of the day was spending it with family. 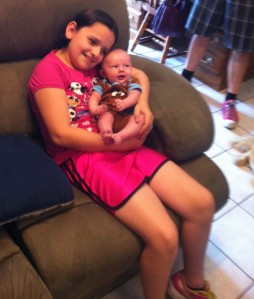 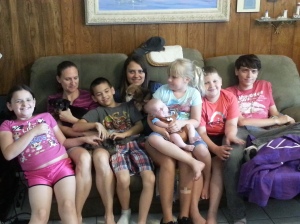 Cousins – and a few dogs 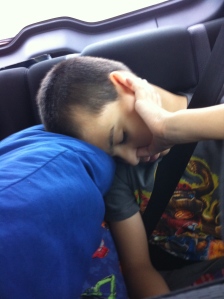 Monday brought more changes with the addition of a licensed driver in our household. 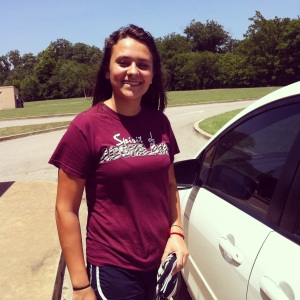 There are no words to describe the first time your teenager drives off in a car without you in the front seat. Needless to say, it’s a good thing this is a recovery week for me. With all the activity around here, I’m pretty amazed that this post is almost finished.

I’m running a 5k on Friday. It’s my next chance to see how strength is contributing to my speed. Anyone else racing Friday?