After last week’s recovery with reduced mileage and intensity, I finished off my run streak with a 5k on Friday and a nice long run on Saturday. This was my first run streak to manage double digits and I kept going for 41 days. It was more for a change of pace that I kept the streak, and also to see if I could boost weight loss. I disliked the extra laundry, and I wanted to focus on cross-training more. Riding the bike and running in the same day was too much of a juggle. I’m glad I did the streak, but I was happy to end it too. I need to keep my joy with running, and it was starting to dampen.

My “summer of speed” is progressing along nicely as I continue to build strength and use speed work to push for new PRs. In August I will be moving into a new age group (and category) for the first time since I started running. The idea was to finish my age at my fastest. A great idea in theory, unless your birthday falls during the hottest part of the year. In Texas.

But I will not give up!

I ran my second 5k of the season on the 4th in McKinney. I have done this group’s 10k course (Memorial Day), but I didn’t know what to expect for the 5k. Apparently, a few hills. I decided to break the mental barrier and not look at my Garmin just like the Radio Run. This time I didn’t have the members of my running group ahead to gauge my speed by. I struggled mentally. The second mile had a pretty steep hill. I felt like I was walking up even though I knew I wasn’t. It wasn’t until the last half mile that I felt like I was cruising and closing in on other runners. The result was 16 seconds slower than May, and what felt like a long way away from my PR of 23:09. My time was 23:47 and 4th in my age group. I got beat by three 37 year olds. What’s funny is that if I had been in the next age group, I would’ve been first. You just never know. 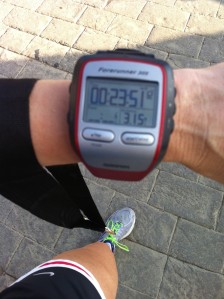 I enjoyed going to the race with a friend of mine. We had a great time, and she placed 2nd in her age group! After going to races solo, it’s so much better to recount the miles with a friend. It also helps when they confirm that hill in the second mile really was a monster and yes, it was hot and humid. 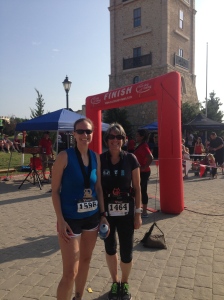 My next PR aim is Sunday’s Too Hot to Handle 15k. I’ve only run one other 15k (this one), so my chances of a PR are good. I will see what these legs can do!