Last week I ran five days and a total of 21 miles. On Thursday, I asked my Airrosti doctor about a long run. I had been running three and four milers. He told me I could run as far as I wanted to as long as there was no sharp or stabbing pain. If that happened, I had to stop immediately.

I headed out with my running friend Saturday morning with a plan to hopefully make it five or six miles. We meet at the park and usually head out for a five mile loop then finish any extra around the park.

This was the result:

A little slower, but I’ll take it!

By the middle of the sixth mile, my foot started throbbing but once I went home- rolled, stretched, and iced – it was better. I was happy with my distance and it felt good to push my endurance. I’m amazed at how quickly it disappeared. Last fall it was common for me to run 7 miles before work, and now double digits are a distant memory. Actually, it’s only been three weeks since my last half marathon, but it feels so much longer.

After my run, my husband and I headed downtown to the new Farmer’s Market to check it out. I thought it would just be an easy ride there and back. Two hours later, which included a ride to a (not so easy) trail that goes around a small lake, we were back in the driveway and my quads were crying. I could write a whole post just about the ride. I actually muttered the phrase “I can’t.” Instead, here’s a highlight: 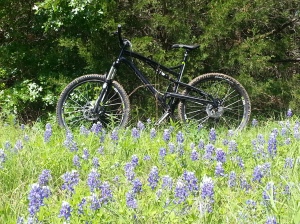 Note all the mud on his tires…and bluebonnets

Early Sunday morning I left the house at 4:30 to head to Dallas. I was volunteering for the Skyline Half. I encourage all runners to volunteer for a race – especially a water stop. It will make you appreciate the volunteers so much more once you have experienced it yourself.

They get as little sleep as the runners do.

There is a lot of waiting.

Then finally some action with a rush of runners. I discovered after yelling out “Gatorade!” forty times, the word sounds really strange. It was a warm day for runners, and since it was down in the river basin it was sticky too. I saw some of my friends from our running group, and they seemed excited to see me. I was also surprised to see some just hang out for a bit before moving on. I typically don’t stop at aid stations unless I’m refilling my hand-held so it was another side of racing I hadn’t seen. There was more waiting as the pack thinned out before the walkers started coming. When the last runner came through, we finished cleaning up. Instead of waiting for the truck to pick us up, we walked back to the start area – which took about 15 minutes. It was also where the closest porta-potties were located (as far as we knew). The finish area was mostly cleared out and there were just a few runners left to come through.

When I got back to my car, it had been almost 6 hours since I’d had anything to eat. I only drank water as we were walking back. No porta-potties meant no drinking for me. I was hot, gatorade stained, tired, and famished. Oh and my feet hurt. But the best part was that because I was part of a group of volunteers that helped out the Dallas chapter of Back on my Feet, a member was able to get registered and ran his first half marathon that day. I also heard words of thanks and appreciation from runners throughout the morning. It was worth it.

Tell me, have you volunteered for a race? What did you get to do?

2 thoughts on “Another Perspective (Volunteering for a Race)”