For all the worrying about my running speed in my last post, last week things sure turned around. I had decided not to worry so much about the long run pace and marathon coming up, and instead I focused on some faster runs during the week. This was mostly due to lack of motivation in getting out of bed on those mornings. But the result was confidence building, speedy for me miles.

Tuesday, I ran a warm up mile, and then went for three miles near 5k pace. I really don’t even know what that pace is anymore; it’s been so long since I’ve run one. I hoped to run near the eight minute range, but my splits were actually 8:45, 8:22, and 8:33. It may not have been the pace I wanted, but it was a good little workout nonetheless.

Monday and Friday were easy run days, so I focused on slowing myself down, not looking at my watch, and paying attention to my breathing. I think slowing down on these days definitely helped me to have better workouts.

I also believe it was part of what set me up for a great long run on Saturday.

Saturday morning, I got up late (again) and immediately had to shorten my long run from 20 down to 18 miles. I needed to be home before 9:00 and my daughter’s district swim meet was that day as well. I don’t know if it was the urgency to finish by a certain time, or the fact that I went to bed before 9 pm on Friday night, but I had no trouble running under 9:30s the whole time. I started out with the first five miles averaging 9:25, and then met the group around mile 8. I ended up with several miles under 9:00 range and then as I ran home to finish, my pace slowed some. Overall, I was completely surprised that I was able to pull off this run with this average pace. Maybe I woke up my muscles with the speed work earlier in the week. It also helped that the weather was beautiful. It was in the high 40s when I started, and I was in long sleeves and shorts. By the end I was pushing up my sleeves and sweating. It was great!

I think that might have been one of my fastest 18 milers ever!

After finishing with my core and strengthening, there was a swim meet on the schedule. I watched my oldest daughter swim her fastest times ever in the freestyle and backstroke. She will be going on to the regional meet this weekend as part of the 400 relay. 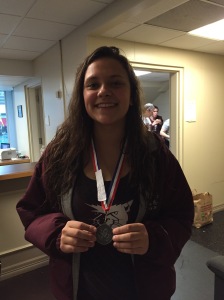 Sunday, the weather was beautiful again, so the bike came off the trainer and I headed outdoors with my ten year old son. The only problem was I obviously forgot how to unclip from my pedal and when we stopped in a parking lot, I fell right over. We had to cut our ride short so I could go home and clean it up. My husband asked him if it scared him when I fell. He said, “Once I knew she was ok, no. I’ve seen her do it before.” Yes, yes he has. One day I won’t have to remind myself to unclip before I lean. So I will probably stay out of the pool this week until my leg is not so yucky. The worst part is right below my kneecap, which is affecting the bend of my knee. I’ll spare you a picture of that.

I did part of my Monday run on the treadmill because I didn’t know if it would alter my gait – it didn’t. But I did put off some post run strengthening such as donkey kicks. That’s okay though. It’s race week!

I’ll be heading to the Hot Chocolate 15k on Saturday. I’ve never done this race, so I’m looking forward to it. Also, the hydration sponsor is Nuun, and you all know how much I love that! 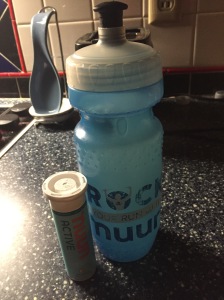