Lately, I seem to be on a “week on, week off” with my training for the Cowtown Marathon. Two weeks ago, I had good speed sessions and a knockout long run. Then for the first part of last week, every run felt flat, slow, and I was ready to be done with each one by mile 3. I was in a funk, and it was hard to get out of bed. So much so that two mornings I slept right through my alarm. I realized later in the week that part of my problem was an increase in pressure at work. Not a bad thing, just me not knowing what to expect. Since I started my new job function, a lot of the responsibility rests on the first part of the month. This was my first month to go through it completely, so I felt a little stressed. I also made the mistake of scheduling other things around this time that I had to adjust my schedule to: daughter’s eye exam, foundation repair…But now I know what to expect, so I’ll be better prepared at the beginning of March and I won’t be training for a marathon either.

I was somewhat ready for a race in the hopes that it would bring me out of my slump and put some motivation back in my body. I was super grateful to my friend who went to pick up packets on Thursday. There was no way that I could have gotten that done with everything else.

I started to get excited Friday evening, but was still so tired.

Then I overslept on race morning – which has never happened! We were meeting at 5:00 and I popped out of bed at 4:34. At least I had laid out my clothes the night before and my friend was driving, so I had some time to chill on the drive down to Dallas. The car was loaded with some of her extended family (mom, aunt, cousin) who were running the 5k. The generations were all covered from the 30s up to the 70s.

The 5k was scheduled to start first, so we made our way to the start area to find where they would need to line up. The we went inside the building to stay warm a bit. The temps were in the low 40s. A little chilly for a 5k, but good enough for 15.

While they headed over to start, I stayed in the building to stay warm. I met a man who asked me about Team Chocolate Milk. He was 72 and running his first 5k! I was able to share about the benefits of chocolate milk for recovery.

After the 5k started, my friend and I ran a couple of warmup miles. We were both low for the week, so it wouldn’t hurt to have a double digit day overall. I spied the Nuun setup near the start, so I was able to get some electrolytes before the race.

I went into this race with zero expectations on my time, but with the anticipation to enjoy a fun race regardless. I decided not to carry my handheld because Nuun was the hydration sponsor. I can not tell you how happy I was to run with my hands empty. No bottle, no pepper spray, no gloves on. It was wonderful!

And that’s what we did.

The 9:00 pacer passed us after the first mile, but we pulled ahead and didn’t see him again. I grabbed some Nuun at the second aid station, which was followed by the m&ms stop. They were handing them out in a little cups. I passed on by, but my friend grabbed two and said we couldn’t pass them up. “Just take it like a shot!” I managed to get a couple in my mouth, and to be honest, it was rough. That was a first for me! It took me three miles to get past the chocolate taste while running.

I hit my lap button at mile 5. By that point we were averaging 8:47 per mile – and there were some hills. Up and right back down. Then again, and again, and again. I wasn’t expecting all of those, but we talked about how it was like the hill we run every Saturday morning together (sometimes more than once). As the course began to flatten out, we managed to pull a faster pace. I was hitting the Nuun stops whenever they came up – my only problem was the amount I kept getting up my nose and all over my face. I obviously need more practice.

Between mile 6 and 7, I told her if we kept running like we were, I had a chance at a PR. She said she was on track too. At mile 8, our last three miles were averaging 8:28. I hit the lap button and we made our move.

I don’t know if it was the motivation to finally set a new PR, the stress of the week, or the fact that we were running together, but in that moment I became focused on getting to the finish under 1:21:00. My body was recalling negative splits, speed work, strides on tired legs, and every other type of workout I’ve been pulling out. I took a quick sip from the last aid station, knowing that I would need that little bit of umph! from the Nuun. In the last half mile, we started passing 5k walkers, and zoomed around calling out encouragements. I was breathing like I was in the final mile of a 5k. But I was still focused. Right before the finish chute, my friend pulled ahead. My legs were like jelly and I could not catch her! My finish was still strong – hers was just a little stronger. I saw 1:20:xx on the clock and I knew I had it. That last mile and change was in 8:07. The dry spell was over and I set my first new PR in almost two years! 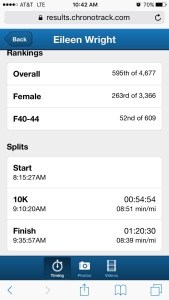 Now for the fun part! A little Nuun, some water, and a whole bunch of chocolate. The medal was a nice touch too! 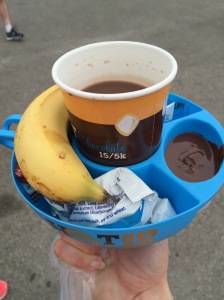 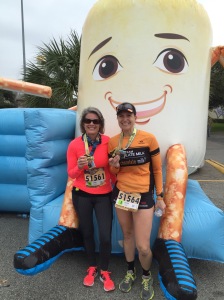 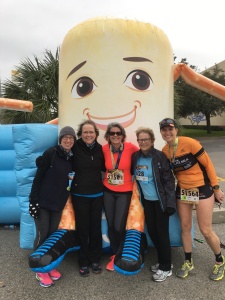 My friend’s mom (next to me) won her age group! They all look cold!

I am so glad I decided to do this race. It was well done, well supported, and even though I didn’t register in the cheapest price, I still feel like it was a good value for what I paid. I’ll be looking forward to it next year. I also hope to see Nuun as a hydration sponsor in more races, because that was great! The only problem I’m having is that the race kicked off a chocolate frenzy for me and I’m still trying to get my eating back to normal. It didn’t help though that we had a chili cook off (with desserts) and a Super Bowl get together in the same weekend.