When I set out on my long run last Sunday afternoon, I was instantly reminded of how hard running feels at times. As I wrote in my last post, I am moving the long run to later in the day so my body can adjust to running in warmer temperatures. That day, my first mistake was eating too soon before I headed out. I wanted to hurry and get back so I had time to catch up on yard work. That’s the other hard part about training for an endurance event through the spring. Everything is growing! I have crape myrtle trees that look more like shrubs because they need pruned. The English Ivy is creeping everywhere. The miniature rose bushes are thriving – thankfully. 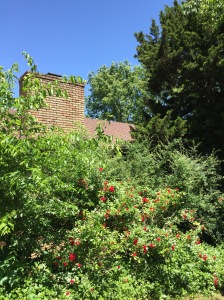 It would be a lot easier to keep up with if half my family wasn’t prone to allergies, but anyway… back to my training.

I realized one mile into my 9 mile run, that my food wasn’t settled. By the second mile I adjusted my route. Mile 3 involved a few walk breaks and was my slowest mile. I thought I might throw up so I headed back toward my neighborhood. I went in the house at mile 6.5 and asked my three kids who wanted to go finish my run for me. There were no takers. I forced myself back out to finish, and it was between miles 7 and 8 when I felt like my food had settled and I was feeling better. I finally got it done after a quick chat with a neighbor who asked me if I was training for a 5k. “Yes, something like that.” 😉

I was reminded of a few things with that run:

Once I finished, I was glad I pushed through. These are the moments I will try to remember on race day when it gets hard. Getting through a tough run reminds me that there are ups and downs throughout and an upward turn could be just around the corner.

I was rewarded with my next run at the track on Tuesday when I was able to nail my 5k pace for 600m intervals. When I looked at the workout, I thought “yeah, right” but I did it! It was my first track workout in months, and it was refreshing to have some pep in my legs.

I like the fact that you never really know how a run will turn out. It’s nice to surprise yourself sometimes – on the road, on the track, on the trail. Wherever your training takes you, just stay with it. You won’t regret it.