Last week was a cutback week for me for marathon training, and I had some fun with it.

Even though the heat hasn’t let up much here, I still got out with the kids and ran to get ready for the 5k we were all doing on Saturday.

They wanted to go to the park to run and then play. Sure, why not? 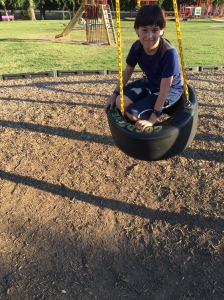 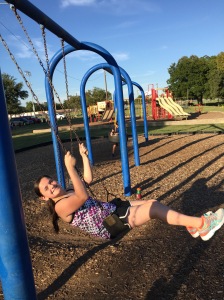 Then on Thursday we ran a mile and a half. My 13 year old daughter would run ahead and walk until the 10 year old almost caught up to her. Then she’d take off again. Nice, friendly competition between siblings. Two weeks ago, she decided she was ready to start training for the 5k, and she made good progress in a short amount of time. 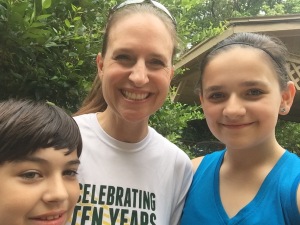 Saturday morning, we were ready to race the Sherman Education Foundation 5k. This was my 7th time to run this race, and it wasn’t the first time for them either. I told them to make sure to run their own race the way they wanted to. Slow and steady, or run/walk – whatever is best for them. 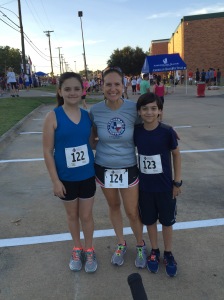 After I finished a very painful 3 miles (I have not been training at sub 8:00 pace!), I grabbed some water and a banana, and headed back out on the course to run my kids in. With a little over a half a mile to go, I saw my 10 year old and ran with him for a minute. He went on to finish, and I found his sister a few minutes back. My husband was out on the course with his bike, to encourage them. When my daughter askedhow far she had left to run, I told her about 3/4 of a mile. Her response, “Really? I’m almost done!” Probably not many kids who think 3/4 of a mile is a short distance. My kids have a different perspective on what “far” is. 🙂

I’m proud of the way they ran the race. My youngest ran faster than he did at the 5k in August, and it wasn’t much cooler. The humidity was high – still. I ran almost the exact same time I ran the race in last year (when it was rainy and a little cooler). This year my time was 24:23. I was hoping to get back in the 23 minute range, but I guess if I don’t train for 5ks, I really can’t expect to bust out a time close to my PR. I did manage to win my age group though. I guess I can’t complain about my 5k time if I’m always training for marathons.

This is my favorite local race of the year because of the traditions around it as a family. The traditions are changing a little with our family – two of my kids had to grow up and move off. 😦 But after the race, we visited the Arts Fest and spent some time at the different booths. And of course we had funnel cake. That tradition hasn’t changed.

With the 5k on Saturday, I got up planning to meet my running buddy for a 12-13 mile long run Sunday morning. This is what I woke up to:

With the time constraints (and lightning factor), I reluctantly got on the treadmill. The storms weren’t moving through anytime soon. By the time it started to clear up, I was up to 10 miles. I just finished off at 13, and that ended my cutback week. That was a rough run, but at least I had podcasts to listen to. Before Sunday, my longest treadmill run was 9 miles. I didn’t want to go that far on the treadmill, but I have goals that won’t be reached by skipping a long run. I learned for next time to put towels around the treadmill, because it was a gross sweaty mess. My body is just too efficient at cooling.

Partly bad lighting, but yes my face probably was that red.

That ended my first cutback week of Dallas Marathon training, and now I’ll start ramping up the miles while I wait for fall temperatures to show up.