The past two weeks of marathon training have been a series of ups and downs, and pretty much mimics my life right now. It also proves that you’ve got to know when to cut yourself some slack on training when life is hectic or stressful.

There was one week of running through grief over losing our dog of 15 years. I didn’t know it was going to be that hard on me. Running is my time to think, to work through problems, to deal with emotions. The high humidity made it even worse. One run didn’t even make it to three miles. But I tend to deal with stress and/or grief in  one of two ways: emotional eating & running. I guess it’s a good thing I have the marathon training in place if I’m going to eat, right?

When it came to my long run that Saturday, I was still dealing with the grief but also a lack of sleep. When I showed up to the humid Saturday morning group run, I had 9 miles done already because I needed to get home by a certain time. I spent the rest of my run trailing the others, and I was just feeling “off.” But when I looked at my pace periodically, it didn’t seem too bad. I decided to bail on the race pace miles and just get the long run done. I was pleased to see my splits were all under 10:00 pace except for the first one (which is usually the slowest anyway).

Hanging back and being okay with it

Later that day, my husband and I started looking for a puppy. The house was just too quiet! With two kids gone out of the house, it was just too much for us not to have a dog. We’ve always had one, and even though this is bad timing – hello sleep deprivation – we needed some joy in our home. 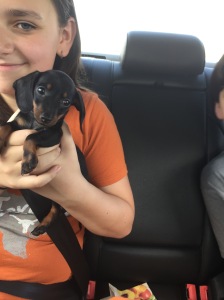 Welcome to the family Chloe!

Last week’s training felt better. Temperatures cooled a bit, and the humidity dropped. There were a few runs that just felt great. I tried out some of my new team gear on Tuesday – National Chocolate Milk Day!

I felt good on my long run Saturday, even though my time wasn’t as low as what I hoped. But it was the first time I’d gotten close to 20. I have two other 20 plus mile runs planned this training cycle. I know my body, and I know that it needs those long runs to be ready for Dallas!

This Saturday, I’ll be racing my first half marathon since Dallas Rock n Roll in March. It’s the Showdown Half in Fairview, and I know they’ll have chocolate milk at the finish! I’m not adjusting my training mileage much, so I’ll be running on tired legs.

It will be interesting to see what I can do on the hilly course.