Last week I finished up my peak week of training for the Dallas Marathon. While the workouts weren’t outstanding, I feel like my training has been consistent and productive so far. The main thing I’ve noticed in the past few weeks, is that I’m not totally exhausted like I usually am. I think I’m doing a better job at rest and recovery. Mostly because I don’t have a high school student this year I’ve been able to get to bed earlier, but I’m also making it a point to nap some on Saturday and Sunday afternoons.

The main struggle for me with last week’s training was being able to complete my long run without too much disruption. There was a 5k that I planned to do with my kids on Saturday. We’ve been run/walking together at least once a week for a mile and a half. I’ve considered those “runs” as the gravy on my training, but it is also what pushed me over 50 miles/week for the second time this training cycle. After discussing with my husband about how to get that 22 mile long run in, he suggested to do 19 miles before and then finish with the 5k. So I had a plan.

Thankfully, I have a great running friend willing to meet at 5 am on a Saturday to knock out as many miles as possible. And it was a cold one! For the first time, temperatures dropped in the high 30s, but I was ready. I do love a good cold run. 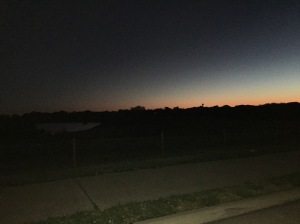 Love watching the sun rise during a run!

We ran until we met up with the group at 7:00 (and some of them gave me grief for wearing shorts), and I ran until it was time for me to get home to pick up the kids for the race. I was worried that I wouldn’t be able to get all my miles in, and the chance of getting any after the 5k were slim. When I headed home I had 17 done so far. 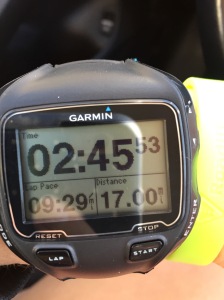 No time goal, just getting in the miles.

After getting the kids to the race site (less than a mile away), I left them in the car to stay warm and I had time to get 2 more miles in. This actually worked well because never really cooled off before the start of the 5k. My husband showed up on his bike to ride along the course and encourage them. When the 5k started, my daughter shot off and I had a hard time keeping up, but my son stayed with me. I knew we would catch her when she needed a walk break. When we caught up to her, I told my son he could go on and run his own race. I would stay with Abby. The race followed the same course that several of the local 5ks use, and I like that it’s an out and back course so I could cheer on others I knew. I was able to see my son on his way back, and my husband was near him on his bike.

I’m really proud of how my kids did on Saturday. Abby knocked off 2 minutes from her fastest 5k, and my son took off 4 minutes. Even though we haven’t run more than a mile and a half at a time since the last 5k, I think the consistency (and cooler weather) paid off for them. After we finished, they told me and my husband we needed to go celebrate their PRs because “that’s what runners do.” 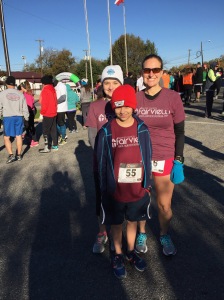 Another bonus: I got my 22 miles done without feeling beat up. Peak week was all about time on my feet – and I got it done. This week’s plan is to get a solid 12 at marathon pace for my long run.

The weeks start flying by the closer it gets to race day, as marathon training always goes. My long runs have been building for the past three weeks, with two 18s and a 20 miler. I have been working on my marathon pace for several miles a week – sometimes two runs a week. This was how one of the 18 milers went.

The next week, I planned another 18 miler with some race pace miles. The plan was to run 10 at marathon pace, but because I was running with the group (we had some new runners that day), I threw in race pace miles when I could. My friend was also battling heel pain and I didn’t want to leave her, so I did some back tracking to stay with her. When she was done, I finished up and really pushed my pace the last mile. I think that’s good enough to count as a fast finish long run.

When I did my 20 miler Saturday, I was expecting to have a slower time, but I was not prepared for how beat up I would feel afterward. My friend and I ran some early miles before we met up with the group. By the time I got back to the park with the group, I had run a few miles faster than I planned and was at mile 16. My husband met me on his bike and rode the last four miles with me. If he hadn’t been there, I don’t think I would have made it to 20. I actually stopped somewhere during mile 18 to rally myself. I was hurting, tired, and wanted to be done. My lower legs were achy before I even hit mile 18. I didn’t run any more miles or harder workouts than I did the week before. My pace went from low 9:00s up to 10:30s in the last three miles. “Just keep going,” I told myself.

and that’s how I felt about that run…

For the next three days, both legs were sore from the knees down. I think my biggest problem was not getting enough fuel in for those later miles. I took in one packet of Clif chews for the whole run. Also, the four miles on concrete sidewalks was probably tougher on me at the end. The pounding was too much.

This week is a recovery week, then next week is peak week, and then I get to taper. It’s moving along fast now, and I’m working on my mental strength to keep my mindset in check. The four hour goal is still out there, three years later. I’m ready to reach it. I need a new carrot.

In other news, I cut Diet Cokes and junk food/sweets out of my life last week. I haven’t had either since Thursday. I decided it was time to try something different because I usually get sloppy with my nutrition as race week gets nearer. I thought about what would happen if I tightened it up this time. I’m desperate to nail that goal! So far, I have felt sluggish and tired, but that’s partly due to a puppy and time change, and a puppy that didn’t understand that the time changed. So anyway, if I survive this I’ll report if there are any noticeable changes.

Has anyone else tried this? What other tactics do you try to reach goals?