Once the dust from last Sunday’s race settled, I went through a bit of a period of disappointment. Trying to examine what I could’ve changed, yet trying to still be proud that I did something big. Dallas was my 14th marathon, and even though I didn’t reach my time goal, that’s still kind of a big deal. So I decided to do some reflecting on my year as a whole to help myself move on past the post-race funk.

2016 was a big year for tri-ing new things and facing fears. (See what I did there.)

I conquered my first open water swim. In a group. Of strangers. Very fit triathletes. I didn’t die from embarrassment. 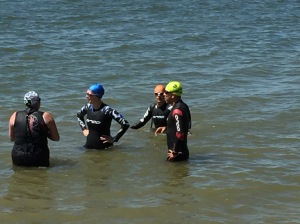 I did my first Olympic triathlon – which coincidentally was the first time I swam a mile. 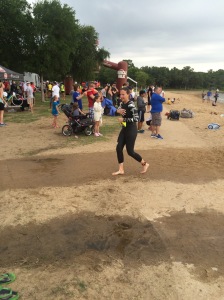 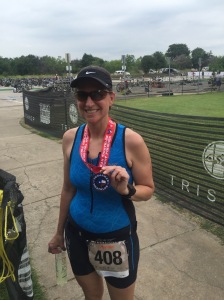 I rode in my first bike rally. It wasn’t what I thought it would be, but I survived. I also learned not to grip the handlebars too tightly. 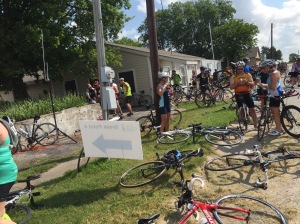 I completed my first half Ironman. Now that was a hard day, and I didn’t even know I could do it. 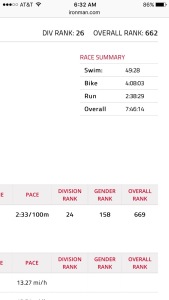 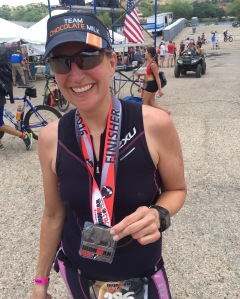 I set a new PR at the Hot Chocolate 15k back in February. And I took a “shot” of M&Ms in that race too. That was a first, and not recommended. At least not at a fast pace. 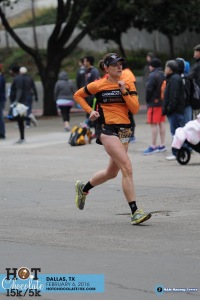 I also drank a whole lot of chocolate milk this year! 🙂 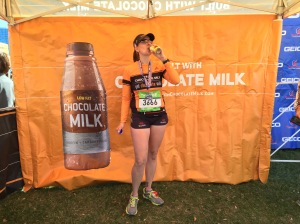 The triathlon adventures brought renewed passion to my running. I have decided to continue to pursue my running goals while keeping up my fitness in the pool and on the bike. I learned that I can continue to improve in many ways and continue to find new goals to challenge myself.

It’s the most wonderful time of the year…

Yes, Christmas, but it’s also that time of year for the Dallas Marathon. While my Facebook feed is full of people sharing Christmas memories, mine pops up with marathon memories.

I’ve been running the Dallas Marathon every year since 2010 (minus the ice storm of 2013) when I ran my first half. My first full marathon was Dallas in 2011 and I’ve registered for the full every year after. The race experience continues to improve, and this year was the best so far.

As I started my taper week, I had all kinds of stuff going on. Let’s just say it wasn’t the most relaxing race week. I didn’t really have the time I wanted to focus on rest, recovery, and preparing my mind for Sunday. But in a way, I wondered if it was beneficial that I didn’t have time to over-think and wonder if I was prepared. Basically I didn’t have a chance to worry.

We planned our trip to the expo on Saturday when the elite ambassadors would be on the speaker stage. I enjoyed this last year, and carried their advice through the race with me. I wanted that again.

I got my bib signed by Desi, Deena, and Ryan Hall. I met Deena and Desi last year, but this was the first time I’ve met Ryan Hall. 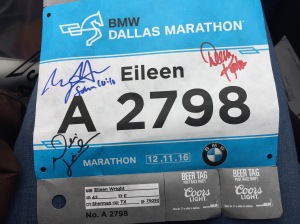 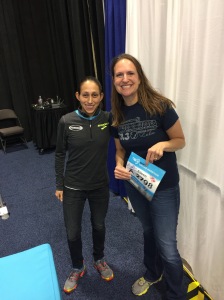 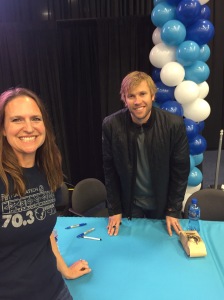 To me, that made the 16 weeks of early mornings and long runs totally worth it. I also knew they would be handing out medals at the finish line, and that became one of my race goals since I was oblivious the last two years. I love that they are so willing to give of their time to the running community!

I snapped a picture of my Dallas Marathon history. 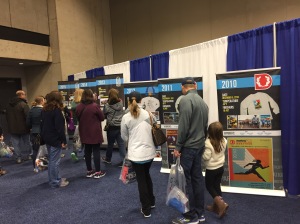 I ended up missing lunch, but I made an early dinner when we got home. I never really felt bloated from too many carbs, but I felt like I was loaded and ready to run 26.2.

Race day weather was perfect for me. Temps in the 50s with a little wind. My husband and I got there early with time to chill in the convention center, then I met up with my friend in the start corral.

We ran the first five miles together, and then I moved into race pace. My plan was to run the first 5 miles in the 9:20 range, then bump up to race pace (9:05-9:10). She’s been battling foot pain, so her plan was to finish. I felt good. It was overcast and there was a little bit of a mist to keep us cool.

I felt like I was holding back in the first five miles (which was a good thing) but at mile 10 all of a sudden my legs felt heavy. I took in my fuel about half a mile earlier than planned, and it seemed to help some. Then I was doing okay holding onto my pace, but it felt harder than it should’ve. My hydration was fine, my nutrition was fine, but my legs felt like I had on ankle weights. 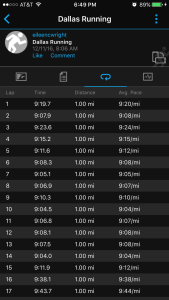 My pace started to fall off when I was running by the lake (miles 16-17). There was a crosswind and I got a little chilled, but it didn’t last long.  At mile 19, I made a quick porta-potty stop. I lost my sub 4:00 goal, and was losing my 2nd goal – to PR. I negotiated a third goal in my head, and then a fourth. I walked, I ran, I walked, and I ran. In the last four miles – straight into the wind – the goal became to finish the best I could and still be proud of my race. My legs were shuffling and so very heavy. The distance on my Garmin was almost a half a mile off from the mile markers. I finally stopped looking at the watch. I ran the entire last mile, and I felt like I was barely moving. 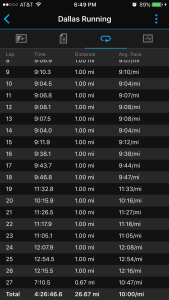 When I was coming down to finish, I saw one of my Team Chocolate Milk members waving to me. That was encouraging, and so was seeing the announcer at the finish line.

This is my blazing fast finish (10:45 pace) captured by my husband. 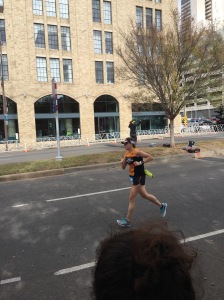 I am so grateful for all the volunteers, police officers, and spectators – and especially seeing those who cheered specifically for me. Thank you Jennifer and your pool noodle! 🙂 It made an unpleasant run much better. 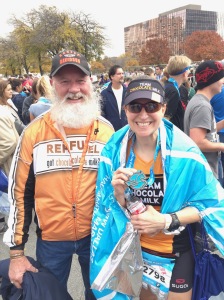 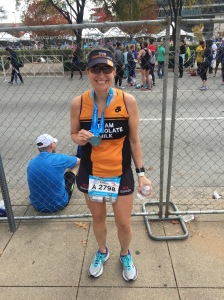 I am so thankful to Dallas Marathon for a great race experience! It truly was a great weekend. There will be another race, and I’ll get that sub 4! 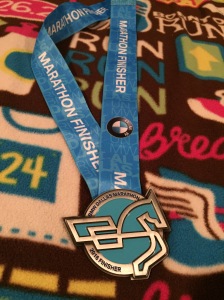 I couldn’t think of a better way to reward four months of marathon training, than to finish up my last long training run with a fun race!

Last weekend, my running buddy and I headed down to San Antonio for a whirlwind trip to run the Rock ‘n Roll half marathon. We left early Saturday morning, and fortunately traffic on I-35 cooperated.  We made good time even with the rain, and at the the expo we weren’t disappointed. I stocked up on more Nuun, and there was a sighting of US Olympian marathoners. 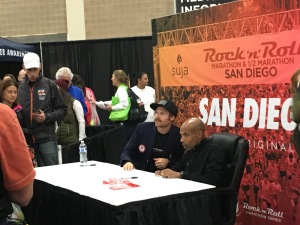 A high-five from Meb 😉 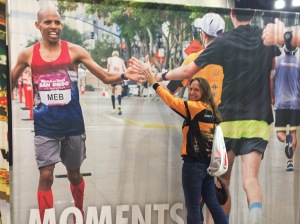 After we checked in to the hotel, we headed for a meet up with the other members of Team Chocolate Milk who were in San Antonio. Since the rain dampened (ha!) our plans for a shakeout run, we went to the Tower of the Americas to hang out. All the times I’ve been to San Antonio, this is the first time I’ve been to the tower. I didn’t realize it was a glass elevator that took you up to the observation deck. So I faced the back of the elevator, and tried not to look out until we reached the top. (I have a slight fear of heights.) Once we were on the observation deck, I was fine. But it was nice to chat with other team members and hang out a bit. 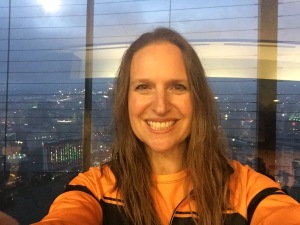 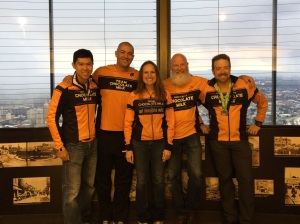 Race morning was cool and breezy, but not too much in the way of rain. The roads were still pretty wet. After all, we were under a flood warning. 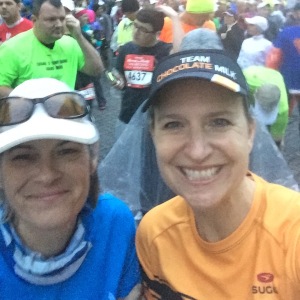 It started sprinkling in the start corral, but once we started running, I began to feel a little warm, and wished I wore my tank. Running through the downtown streets, we would turn into the wind and then I’d cool off some. We ran right in front of the Alamo, which is my favorite part of the course. The two hour pacer was in front of us, and my friend heard a spectator yell, “Way to go, two o’clock!” Ha!

Around mile 6 or 7, it started to rain harder and the rain was dripping off of my visor. The course is mostly flat, with the few climbs past halfway. I remember one tough little hill. Mile 11 maybe? But I was ready for it. I’ve been training on hills, and my legs were ready. There were also a couple of places we made a detour to avoid large puddles in the road, but I was completely soaked when I finished. This would be a great PR race because it’s so flat, and I’d love to try to do that one year. 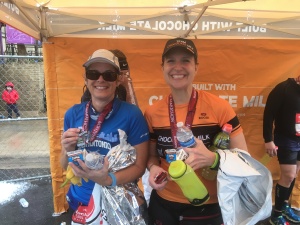 One of my favorite things about the Rock ‘n Roll races: I know there will be chocolate milk ready for me at the finish. 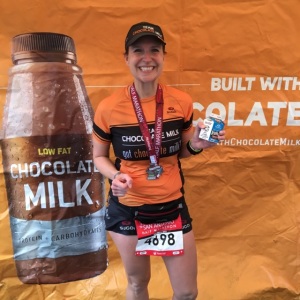 Chocolate milk is my go-to for recovery after a hard and/or long run. Not only does it fit in my budget, but I don’t have to worry about where to get it when I run out. Grocery stores, convenience stores, and even McDonald’s carries low-fat chocolate milk! If you want to know the science behind it, check out this article. I know that it makes my body happy. I feel like I’m doing good for my muscles, and the soreness is less pronounced when I recover right. Try it!

Now that I’ve had my fun race (in the rain), I’m ready to focus on my goal for Dallas this Sunday. I’ve been chasing the sub 4 hour marathon for three years. At this moment, it looks like the weather might actually cooperate this year. I’m not going to hold my breath on that one, but I will focus on the things I can control: nutrition, rest, and following my race day plan. If I survive the taper…