This post is going to be a little hard to write, but since my first race of the year is Sunday, here goes…

I don’t know if I every really recovered from the 21 miler that was such a struggle. Running has been…difficult. My pace is barely below 10:00 for every run and last Friday I didn’t even get up for my easy run. Missing motivation, mood swings, and general apathy in other areas. I first thought it was hormonal, but after three days of unexplainable shifts in my mood (and the tears that followed), I wasn’t sure what was going on. My poor husband.

I hoped the extra day of not running (Friday) would give me some energy for the long run on Saturday. My friend and I planned to do 12-13 as our taper for Cowtown. It’s no secret that we like to get our long runs started earlier, because our group usually meets at 7:00. Another runner messaged me on Friday and asked if she could join us. To my delight, when I got to our meeting place, there were five of us. It was nice to have the different conversations going, and it helped with my funk a little. We did five miles and then met up with the rest of the group. 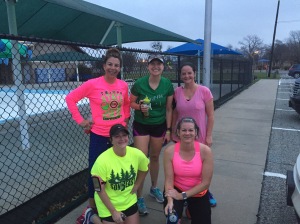 We all headed back out with the others getting a total of 10 done.

It was the last couple of miles that the lack of energy reared its ugly head. My friend, who has been dealing with injury and low weekly mileage, was having some of the same issues – like I’m hitting a wall during every run. We slowed down and even walked a little.

We have decided Cowtown is not going to be a fast marathon for us.

On Sunday, I got out to run another few miles and see how I felt. Also, since I missed Friday’s run, my weekly mileage was a little low. (I know, I know.) It was a little warm out, but I managed 4 miles just under 10:00 average pace.

A few hours later I still was a little out of breath. I looked up the symptoms of overtraining, and I start to wonder if that’s what I’ve got going on.

But all the other symptoms point to overtraining. Looking back, I don’t really think it was as much overtraining, as it was the toll of everything else going on in my life. I just didn’t realize how it was affecting my body. The week before the 21 miler, I had a great week with some swimming added in. My nutrition was on track. Then I guess everything went haywire the following week and did me in.

So my goal for this week, as I get ready to run a marathon on Sunday, is to get extra sleep and eat right. The Cowtown Marathon will be my 15th marathon, and I want to finish with a smile.

I’ve come to terms that it will not be my sub four hour marathon. There will be other races for that. It’s disappointing, but not the end of the world.

My question for you: How do you motivate yourself to get excited about a race when you don’t expect to run well?