It’s been a while since I updated my blog, and I wanted to do a year end post like have in the past. But honestly, I was kind of frustrated with my 2017 year of running. I spent the first half of the year trying to figure out why my “speed” was missing, and working to bring it back. The second half of the year was almost all training for the Dallas Marathon. My biggest win of the year (in my mind) was getting Rock ‘n Roll San Antonio under 2 hours. But at least I felt like I didn’t lose any more ground. My shorter distance times are mostly the same they were a year ago, and that’s okay. On a positive note, I replaced the battery in my scale the week after Dallas and I had lost 3 pounds! That never happens while marathon training, and I really think it was the SAM (strength and mobility) work done as part of the Simple Marathon Training. I am definitely keeping that up.

After Dallas, I took a bit of recovery time, and then it was time to get to work for Cowtown.

I won an Instagram contest for a free month of coaching from RunRelated. Hiring a coach is something I’ve talked about with my husband for a while, so this was a great opportunity to see how it would go. I decided to continue with my coach after my month was up, because what I’ve been doing isn’t working for me anymore. It’s nice not worrying about what workout to do, or what the long run should be. I just check the schedule and go do it.

The major challenge for Cowtown training lately though has been winter.  We have had so many below freezing days this year in Texas. I did a track workout in 16 degrees one morning, and was surprised when the buff I used to cover my mouth and nose came off in a frozen block. My Nuun bottle also froze! Rookie. Lesson learned. On a positive note though, I nailed those 800s! 🙂

Then on January 13, I ran my coldest race to date. It was the Resolution Run half marathon in McKinney. A smaller race to give me a little motivation to start my year. My goal was to run under two hours again, because this will be the year of the sub 2 half marathons. The temperature on race morning was below freezing and it was windy which brought real feel temps into the teens. Brrr! We hung out in the car as long as we could, because the start was right by the parking. Love small races! I wore two long sleeve tops under a jacket, my long pants, CEP knee high socks, my buff, fleece headband, fleece mittens and hand warmers. I have never worn so much gear!

It was an out and back course, and I felt good starting off so the first few miles were a little faster than they should’ve been. Plus we were running into the wind. Dang it. But I did begin to warm up, and started to remove gear when we turned out of the wind. The buff went in one pants pocket, hand warmers in the other. I even took my mittens off for a bit and considered ditching my jacket at a water stop. I met another one of the Cowtown race ambassadors during the race, and we all ran together for a few miles chatting about Cowtown. That was fun.We were behind the 2 hour pace group, and I kept them in my sights planning to catch them in the final miles.

Then we made the turn around to come back, and I was glad I didn’t ditch my jacket. I was doing good to hold onto my pace, keeping my miles right around 9:00.

The plan was to run as hard as I could for the last 5k, but I couldn’t find another gear. I stopped looking at my pace and focused on catching the next person in front of me. I tried to reel in the pace group. They weren’t getting farther away, so I knew I was at least on target. Also, there were a couple of floaters (pacers) who were running along encouraging us at different points. It was nice to have someone alongside me telling me to keep it up, because it was getting hard. At one point I was seriously ready to chunk my heart rate monitor in the grass. It felt tight around my chest, even though it wasn’t. I was so glad to see that finish line, because I was ready to get out of the cold! 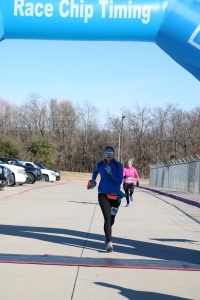 I met my time goal – barely. But I am okay with that, because I was probably carrying about 10 lbs of gear that I don’t normally run with. Plus, when I took my jacket off to put on dry clothes, my layers were soaked in sweat. 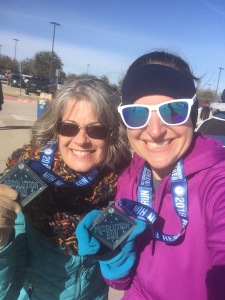 Last week’s training wasn’t any warmer. The temperatures hit the point that I had to go shopping for better gear. I went to TJ Maxx and found some fleece lined tights to wear under my pants, and a warmer fleece lined jacket that wasn’t bulky. I got to try it out at the track on Wednesday, and it was a better layering combo than what I wore in the race. I would rather run outside if I can. For the amount of money I spent, I won’t be too mad if I only wear them a couple of times a year. 🙂

Thankfully for Saturday’s long run, temps were in the 50s. I was in shorts and short sleeves, and my visor! I was happy, because I’m just over sub-freezing weather. I felt so much lighter without all that extra clothing, and the sun was out! My legs felt good, and even though my stomach didn’t quite cooperate, I had a good day.

This week is a recovery week, and I’m going to take advantage of the extra rest. Recovery weeks are my favorite!

Quick question: What’s the coldest race you’ve ever run? Do you try to train outside when the temperature drops?

2 thoughts on “Kicking off 2018 and Some Cowtown Training”