Sunday, I completed my first triathlon in about two years. Mostly to let my plantar fascia completely heal, but also because I needed a mental break. My coach was on board, and actually encouraged this switch.

The training has been good for me. I’ve seen progress in the pool, and on the bike when I took it out to the roads. I’ve run some shorter distances: track workouts, brick workouts, and haven’t run for more than hour. I was a little nervous earlier in the week, and it was about stuff that’s pretty much out of my control (flat tire, etc…). By the time Saturday rolled around though, I was excited.

I laid out all my gear after my Saturday morning easy workout, and I practiced transition a few times. I had a pretty good handle of going from bike to run (from weekly brick workouts), but I needed to refresh going from swim to bike. Once I was comfortable, I packed everything up and didn’t think about it the rest of the day. 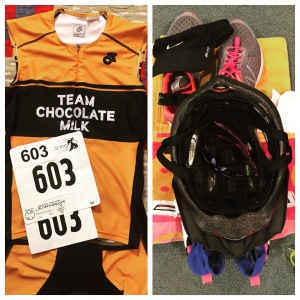 Sunday morning was a little windy and overcast, but still warm. I met my friend Leda there. I’m so glad she lets me talk her into these adventures. We were only able to bike together once – the day before. I also had other friends at the race, including my friend who talked me into doing my first triathlon three years ago (when I was dealing with PF in my other foot).

The swim, which used to scare me, was 350 meters in an outdoor pool. I had some trouble in the first lane trying to get around a lady doing the breaststroke. I almost got kicked in the face a few times, and couldn’t get around because of the guys coming up behind/next to me. It was hand to foot combat! 😉 After the second length of trying to get by, I was able to make a big push from the wall to get ahead of her. It took me about 200 meters into the swim to get into a rhythm and slow my breathing down. It wasn’t ideal, but I survived.

Out of the pool, I made my way to my bike. Transition went well. The hardest part was running on concrete to get to my bike. My bare feet don’t like hard surfaces!

It takes me a few minutes to get settled in on the bike and feel comfortable. Then I start hydrating with Nuun. My plan was to finish my bottle about 10 minutes before starting the run. The bike was 12 miles. There was a little bit of climbing, but I consider this one of my [few] strengths on the bike. I liked the fact that it was two loops, so I knew what to expect on the second one. I settled into a decent for me speed, and didn’t wear my legs out. The wind was a little tough in places, but nothing like Buffalo Springs!

Back in transition, I swapped out my shoes, grabbed my visor and race number, then headed out to the run. This was my sport! Since my first triathlon, I’ve always looked forward to the run. It was the first time throughout the race that I felt it was hot outside. I settled into my pace, and my plan was to increase speed a little each mile. In the third mile, I picked it up and focused on finishing strong. My first and second miles were around 9:00 pace, and I averaged 8:54 overall for the 5k run. Negative splits. Yay!

I loved the finish area! I got my water and medal, then found my husband. I was able to see my friends after the race too. We had watermelon, pancakes, and Nuun. I was a happy finisher!

I had a lot of fun, which was the ultimate goal! I forgot how much I enjoy triathlon (when I’m not worried about swim cutoff times). 🙂 I was mostly pleased with my results. I was hoping to have a better swim time, but I don’t typically time myself jumping in and climbing out either. I was also happy with my overall placings. Usually I’ve been at or near the bottom of my age group. Progress. 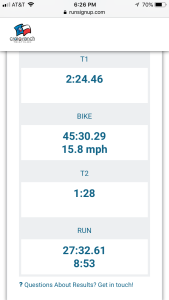 Now, it’s time to shift back to running. I’ve got a whole 4 days of running this week, and I’m ready! I have some big goals to crush.