It’s the summer that won’t end here in Texas. It feels like almost every run has been 80 degrees and high humidity. But that hasn’t stopped me!I’ve stayed busy with a few races, training, and general back to school mom stuff here lately. It’s been a busy couple of months settling into a new routine, so I’m going to attempt a catch up here so I can get back to some consistent posting. Hopefully my writing won’t seem all over the place, but if it does, that’s just the way things are moving here.

School has started, and all the activities that make me question my sanity of training for endurance events. Taxi service is in full effect. Not pictured: swim practice and concession stand duty.

As the youngest kids get older, my bedtimes get later. I’m hoping since my big goal race is later in the year, that most of this busyness will pass before peak training for the marathon hits. I hope.

The Hustle for Health was in the dead heat of August. I ran the 10k, and my son ran the 5k. They moved locations this year to a brand new park that opened in Denison. I was kind of sad because the old 10k course went right in front of my house. It was a hard course for the first half, but the second part was flat. This new course was different. Hills were still in the course, but I wasn’t a fan mostly because the last couple of miles wound through the park sidewalks. It is hard to manuever around 5k walkers, three or four across. So even though I didn’t care for the new location, I will keep doing this race every year because it was my very first 5k ever ( in 2010). I’m proud of my son for getting through the 5k. It was so hot that morning, and he has been focusing on strength with a little bit of running. My time was okay, but not what I wanted. Still, I pushed myself through a summer race and that counts for something.

Earlier this month, I ran my favorite 5k of the year: Sherman Education Foundation Arts Fest. I love this race because so many of our group is out running it, and it is such a good time with my family. It was a little cooler, but mostly because it was overcast. It was still humid. I ended up running the same exact chip time as the year before. I think that’s a testament that I’m not slowing down. 🙂 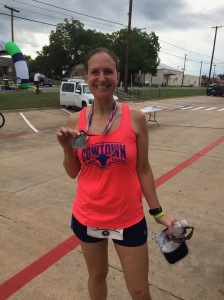 My son also ran the 5k, and set a PR running on his own. The only running he has been doing is for football. I sure wish I could do that without any training.

I have the opportunity again this year to serve as an ambassador for The Cowtown Marathon. If you’re looking for a winter race in Texas, this is it. They do an excellent job. You can register through my team, Anyone Can Run, to save money. Use promo code AMBASSADOR5 to save an additional $5. I’d love to see you there. Mark the last weekend of February on your calendar!

The Colony Half – October 27

I may add in some shorter races here and there, but these are the ones I’m registered for so far.

Will I see you at any of these races?