Goodness, the month of November was busy! I’m still in the middle of training for the Houston marathon in January, so not too exciting, but I did run a couple of races since my last half.

But first, let me share some exciting news of what has kept me busy this fall. I completed my running coach certification, so I am now a certified running coach with RunRelated! That’s who has coached me for almost a year now, and now I get to be a part of it from that aspect. Before having a coach, I had always planned my own training, and I’m really looking forward to this new journey and helping other runners reach their goals. Take a look and see if RunRelated might be a good fit for you. It’s affordable, individualized training, with access to your coach via email, text, whenever you have questions or concerns.

Through my training, I’ve run a couple of races. The first was a 5k Turkey Trot that I ran with my son. I ran my long run first, and then we went to the race. He wanted to set a new PR, but had been sick the whole week before. Once we started running, he realized that he wasn’t going to be able to run a PR. He would tell me to go on and run my normal speed, but I said I was going to run with him the whole way, just like we planned. During that race he learned a valuable lesson: sometimes the biggest challenge is just finishing a race when you don’t feel your best. I learned that he can out kick me at the finish. 🙂

I also realized, after looking at the pictures, that my little boy isn’t so little anymore.

The weekend after Thanksgiving, I ran the McKinney Believe 10k with a couple of friends. I’ve done this race several times, so I knew what to expect. This was also a last ditch effort to hit the qualifying time for front corral for Houston. It was a long shot.

Race morning weather was perfect. Mid 40s and sunny, so I ran in my shorts and short sleeves. The first mile is mostly downhill, so that’s misleading. But I hit my first mile in 8:14 so I focused on staying consistent. Miles 2 and 3 were both 8:07. If I can just hold this until mile 4, I thought. My coach’s goal was for me to run sub 52:00. When I hit mile 4 in 8:13, I thought at least I should have that. I had my screen set to show overall time and average pace, so I knew I was still on track and it would be close. But I didn’t take my foot off the gas. I ran those last 2 miles like it mattered, and even though the splits were 8:20 and 8:18, I managed a water stop (kind of) and weaving around 5k runners in the last mile. At least they were running and not walking though. The last stretch of the course goes up and down, and finishes straight uphill. I was not going to sacrifice my time because of a silly hill. I charged up the hill, complete focus on the finish line. I didn’t look at my watch until I finished. My last .3 mile was at an 8:06 pace.

My finish time didn’t meet the cutoff, but my average pace was right on. Had I run closer to 6.2 instead of 6.3, I would have made it. But more importantly, I saw the runner that I’ve been searching for the past 4 years. I ran a race time I haven’t come close to since 2014, and I’m finally starting to see the results of my efforts. I’m starting to believe in myself again, and that matters more to me than a specific corral. When I posted this on my Instagram, I said “it’s not always about race times, but sometimes it is.” My official time was 51:38, and a quick search on Athlinks confirmed it.

Plus, I had a nice little age group win too. 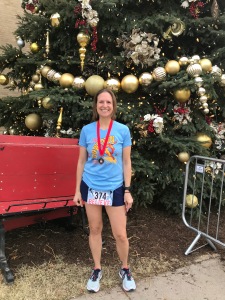 In my next post, I’ll recap my Rock ‘n Roll San Antonio weekend. It’s a busy month of racing!