The Too Hot to Handle 15k is a race that I’ve done several times. I don’t mind running this race in July, because they do a good job of keeping runners cool. I also like to test out my fitness a few times in the summer with longer races to see how I’m progressing. My reasoning is that if I can run x:xx in the summer when it’s hot, then when it’s cooler I’ll be flying! I talked my running buddy into doing it with me, of course. Racing is much more fun with friends.

This year was definitely hot. The overcast skies from my last two races were gone, and the sun was shining when we started. 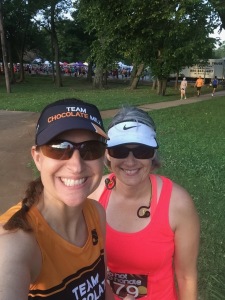 I didn’t really have a time goal, but I hoped I could finish around 1:24:00 or faster. I also knew the chances of placing in my age group were slim. This is a popular race and there are some fast runners in my age group! My first mile was 8:57, second in 8:34, and the third was 8:43. At this point I held to the idea that a 1:24 was possible. I focused on keeping each mile under 9:00 pace. I sipped on Nuun in my handheld bottle to stay hydrated, and ran under overhead sprinklers as I passed them. It was mostly an out and back course, so I made mental notes of the aid stations for the way back. Miles 4,5, and 6 were 8:37, 8:45, and 8:57. It was after mile 6 when the heat started to get to me. I grabbed ice cold towels when I could, squeezing the water out over my head and neck. Mile 8 was my slowest with 9:06 when there was a steep hill. I was super proud I didn’t walk it. I tried to drop my pace down more for the last two miles, but basically I was hanging on with what I had left. Coming around the last turn, I wanted to kick it up a notch but I had no more gas in the tank.

My first thought when I finished was, “It’s all good until the sweat drips into the eyes.” Oh my! I couldn’t see anything due to the salt burning my eyes! It took me a few minutes to cool down using the ice cold towels and sipping on my Nuun. I had the best two orange slices ever, and sat down on the curb to watch for my friend and another runner from our group to finish. 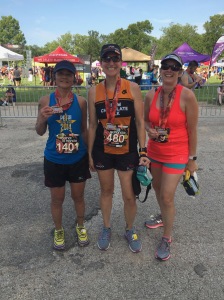 This past Saturday, I decided to run 10 miles for my long run. I had no specific pace, I just wanted to get a good double digit run in because I’d be gone the next weekend. Also, marathon training starts on the 24th and the first week has a 12 miler. Our group left from our usual place and the humidity was so thick! Then in mile 2, the sky opened up and we were running in a downpour. I did feel a little less crazy though since others were out there too. Some headed back one direction, and we went a different way to add a few miles. Then I started to feel blah.  My stomach wasn’t feeling great, and I found a timely construction porta-potty. By mile 7, I was ready to be done but we were still two miles from the park. Thankfully the rain had turned to a mist which kept us cooler. We made another pit stop at the gas station for my difficult tummy, and I was talking myself down from 10 miles. When we got the park, I made another restroom stop and we were at 8.7. We decided to loop around and then walk the rest of the way to the cars, but when we got close to mile 9, she says “Let’s just round it off to 10.” It was my fastest mile and the only one that felt good. If my friend had not been there to keep me going, I don’t know if I would have made it to 10. But we got it done, and then we rehydrated with watermelon. It was great. 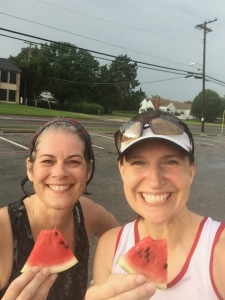 It’s been a while since I felt that bad on a long run, so I guess I was due one. I am thankful for my running friend because we push each other to do more than we would on our own. We each have our good days and bad days, but we stick it out together.

It’s been an interesting mix of workouts the past few weeks. I’ve done a couple of bike rides, some trail running, track work, hills, and a little bit of racing to keep my motivation strong. 🙂

A few weeks ago, I ran my third half marathon of the year at the Jalapeno Half in Fort Worth. 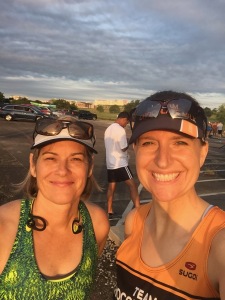 It’s been a few years since I’ve done this race, and the course is different. I was expecting a hilly tough course on the roads. Instead, we got an overcast day along the Trinity Trails in Trinity Park. It was halfway out on the paved path, a turnaround, and back. I had a goal of wanting to run just under 2 hours. Spoiler alert: I didn’t quite make it, but it was my fastest so far this year. I held pretty steady around the 9:00 pace up until mile 8 and then there was a porta-potty stop in mile 11. But I didn’t quit on myself (no walking) and finished with 2:04:34. Since most of my long runs have been around the 10 mile mark lately, I’m happy with that. 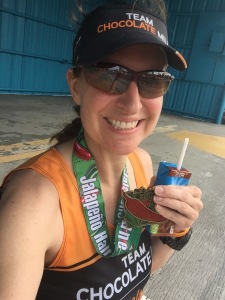 I made sure to bring my own chocolate milk!

It was a big surprise when I checked my results and found I placed 3rd in my age group. I figured it was a small group, but online results showed more than 20, and about 400 runners in the half. Even though it certainly wasn’t my fastest half, it helped boost my motivation to keep working hard. So I’ll take that trophy! 🙂 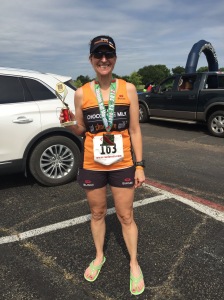 My next race was a 5k in McKinney this past Saturday – the Red, White, Blue Run. This is why I’ve been working at the track every week – trying to remind my legs they can run fast.

We had some heavy rain the night before and early in the morning, so I wasn’t even sure if I was going to get to race. But the storms cleared out, and I got to the race site early enough to do a couple of warmup miles. My goal was to run under 25:00 based on my Strava mile (7:45) the week before, and my Memorial Day 10k. Prior to this, my last 5k was in September, so I was long overdue for a fast run.

As the start time neared, the early morning cool air had disappeared. At least it was still overcast. There were about 150 runners, so it wasn’t a huge race but enough people to engage my competitive side. The main trouble I had from the start was with my shoes through some wet places. There’s not a lot of tread, and I’ve only used them on the track. But they are lighter than all the other shoes I run in so they feel great! My Garmin buzzed the first mile right around 8:00 pace, and some quick math let me know I needed to hang on or drop it down some. My second mile was almost the same time, and I started to reel in some of the runners that were ahead of me. Right before the end of the third mile, there was a short climb. I knew it was coming, but boy did it hurt. In fact, the whole race hurt! When I saw my pace at the end of the third mile, I knew that to make my sub 25, I needed to bust it out to the finish. It was going to be close, and I thought there was a chance I wouldn’t make it. But then I crossed the finish and saw my time. 24:34! 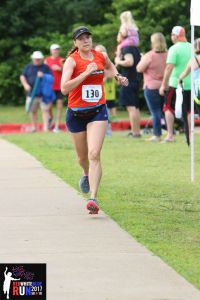 This is probably the best (evenly) paced 5k I’ve ever run. My first mile is always the fastest – by more than a few seconds – but not this time. I didn’t step off the coals! 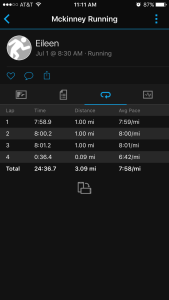 I went back to get my yoga mat out of the car and do my strength and mobility (SAM) work. Then I headed back over to the site to check my results. I won Female Masters! More motivation for me to keep working hard – and a pretty nice award too! 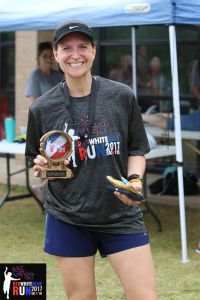 Later, I compared my time to that September 5k. It was on a flat course and my time was only 11 seconds faster than this one. Even though I have felt slower this year, I’m really running about the same as I was last fall. I think it’s just that I’ve had several races (marathons, half marathons) where I let myself off the hook, and quit chasing my goals with passion. I settled for comfortable, and I’m not okay with that anymore. My running is kind of like my math classes were in high school. I could make good grades, but I had to really work hard to get those good grades. It wasn’t natural for me (like reading and writing). So when I don’t put forth that effort to work on speed, or race, or just push myself period, then I’m just not going to get any better. I want to improve, not stay the same. I don’t know if that makes sense, because I really need to get some sleep right now, but basically I need to be as intentional with my running as I was with my math classes.

This coming Sunday, I have one more race before marathon training starts – Too Hot to Handle 15k. It’s going to be a warm one! But I’m going to do my best and stay on the coals.