Oh, Dallas Marathon how you continue to steal my heart every year!

I look forward to topping off months of hard training and knocking out a great race. After sweating through the summer, I love to watch my pace drop as hard runs become easier. I get pumped for race week. Then the Dallas Marathon has to go and break my heart.

The difference this year is how I handled it. 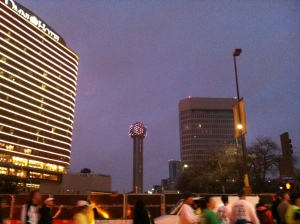 The lights on Reunion Tower celebrating runners with 26.2 and 13.1

My time goal for the marathon this year was to break four hours. This was my fourth attempt. I trained harder and longer than I ever had. I was primed. I was ready. I was rested, hydrated, and carb loaded at the start line.

The temperature was in the low 60s, south winds, with 88% humidity. (Garmin data nerd) Around the start corral I saw several other runners from our local group which was great! Most of them were running the half, and yes I was a little jealous. 😉 I met up with the other runner from the group who was running the full. Our goal times were pretty close, but she is faster than me in all the shorter distances. I debated if I should run with her and push myself or just run my own race. In the end, I decided to push myself, and if I needed to pull back in the later miles then I’d still be okay. We hit the first 5 miles right on target pace. Shortly after I took my first GU, I started to feel funny. I couldn’t explain it. I told her, “Go on ahead, I’ve got to pull back. This is not my day.” She asked me if I was all right. I was, but I knew sub 4 would be a fight. Soon after the 10k mat, I took my first walk break. My legs were heavy and I felt like I couldn’t move. I watched my average pace drop significantly on my Garmin. I decided that I would hang on to the 4:00 goal as long as I could, but by 15k it was gone too. I walked up hills and ran down until I could catch my breath and run for most of a mile. I watched the 4:00 pace group pass me. Then later the 4:15. The rain became heavier in the last two miles and I was splashing through puddles. My final two goals became to stay under 4:30 or make this my fastest Dallas finish – under 4:37. 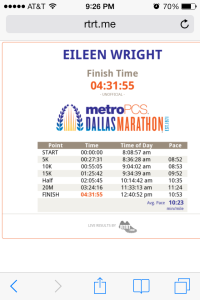 Nice to know I could pull it together at the end.

My finish of 4:31:55 was way off my time goal. It turned out to be a really long training run for Houston on January 18th. 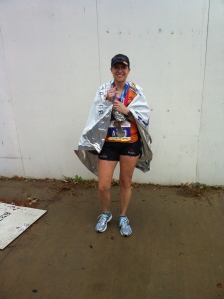 But it became my fastest Dallas time out of the three full marathons I’ve done there. I cleaned up nicely: 3 medals, 2 Clif gels (saved from the aid stations), a banana, an orange, a tech shirt, and a backpack with packaged snacks. I got my money’s worth. 🙂 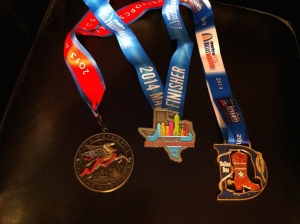 The only thing missing was the chocolate milk. So we made a stop on the way out of town, because I need all the benefits of recovery. 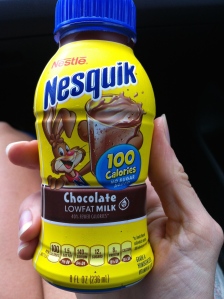 I appreciate the efforts the Dallas Marathon staff went to in order to make up for the ice storm of 2013. Discounted registration, previous year’s medal picked up after this year’s finish, and mailing out the participant shirts last year. They went above and beyond to make up for something that was out of their control.

I was also impressed with the elite runners that were there participating/serving as ambassadors or racing. Ryan and Sara Hall, Deena Kastor, and Meb! From some pictures I saw on Instagram, they were handing out medals at the finish. Unfortunately, I missed meeting them.

I haven’t figured out what happened to my body during the race. If I went out too fast, I would’ve made it at least past the half way point before I blew up. I can run a half marathon around 8:27 pace. My tempo runs at distances from 6-10 miles have ranged from 8:35-8:45 pace. I did come home to a sick child though who is still running a fever a day later. I can only guess that maybe my body was fighting something and I needed to slow down to stay well…?

So what now? I had my cry on Sunday, and Monday I moved past it. I’ll take a week of active recovery – slow walks on the treadmill, stationary bicycle, and sleep. Then look out Houston! I’ve got a redemption race on my radar!